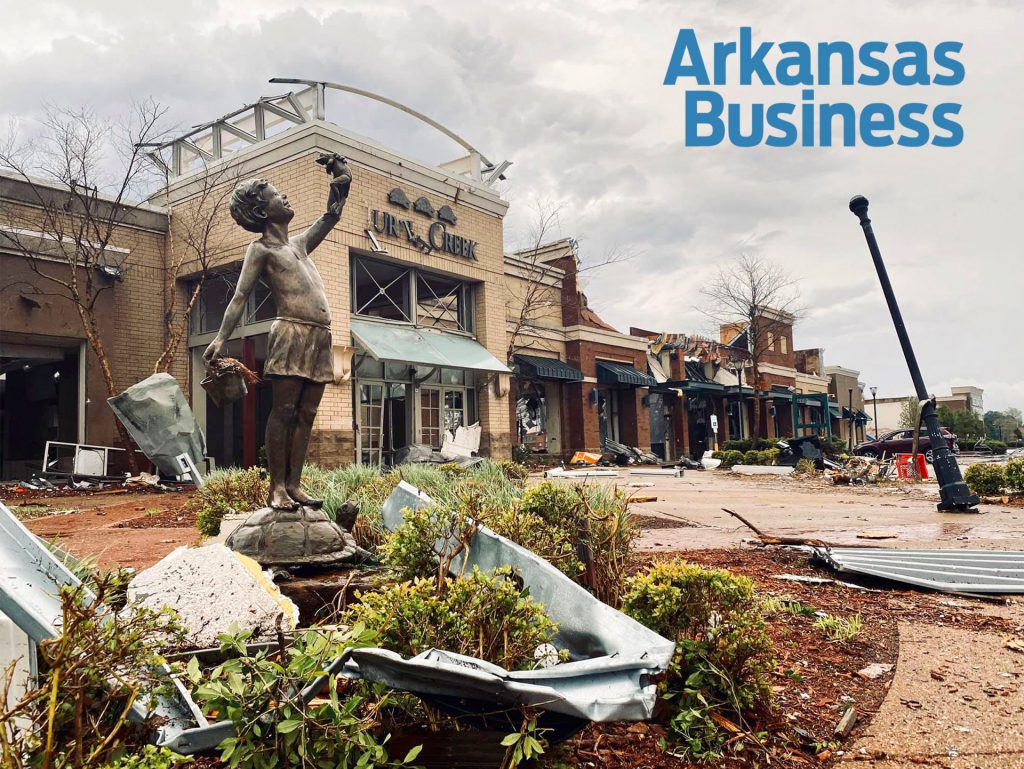 While Arkansas’ phased, reopening of businesses is underway, tenants of the storm-ravaged Mall at Turtle Creek in Jonesboro are trying to figure out where their businesses are going to be.

The tornado that struck the city in late March did significant damage to the 14-year-old mall and some business owners are looking to at least temporarily relocate while waiting for the chance to assess damage.

Josh Brown, owner of Haag Brown Commercial Real Estate and Development, said mall tenants like Best Buy, Gamble Home and Gearhead have contacted the company about the possibility of temporary housing. But decisions are on hold as the businesses wait for the all-clear to get into their former locations for damage estimates and to work through the insurance process.

“They don’t know if they need to be working with us to find a place for one year or if they need a whole new deal,” Brown said.

An EF-3 tornado with maximum winds of 140 mph struck Jonesboro on March 28. The mall was hard hit, with damage estimates of at least $100 million, but because it was closed thanks to the coronavirus pandemic there were no fatalities.

There were also no fatalities citywide and most reports have the injury count at 22.

Before the tornado, the mall’s website showed Target as the only open store operating on limited hours. The mall roof sustained significant damage and major portions are missing, and according to reports and images, some stores like Best Buy were left unrecognizable.

Brown said the mall’s owner, Brookfield Properties, has so far provided limited information and guidance, leaving the business owners unsure if they might need temporary relocation space or something more permanent for a longer haul.

Mall manager Richard Jackson had not responded to email questions by deadline. In a statement, Brookfield public relations director Linsay Kahn said: “We are currently working with our tenants to provide safe access to their stores and are in the early phases of our plans for moving forward. At this time we cannot allow cameras to come on-site. We appreciate your understanding and support during this time. We will share updates as soon as we are able.”

Brown said he didn’t think there was anything questionable about Brookfield’s deliberation in allowing the businesses back into their locations.

“It’s kind of to be expected. You’ve got so many, out of the normal things that are affecting them,” Brown said. “I don’t think anything fishy is going on on Brookfield’s side with the mall. … They’re going to want to maximize their opportunity to make sure they’re protected, from an insurance perspective.”

But Brown could commiserate with the mall’s business owners who are in limbo before they can consider their next step.

“They’ve got inventory just sitting in there,” he said. “Their insurance adjusters I’m assuming are wanting to get in there and survey the damages. It’s been a sad situation because some people don’t know what’s going on.”

The 750,000-SF mall opened at the intersection of Stadium Boulevard and Highland Drive in 2006 and featured 230,000-SF of retail space on 73 acres. It was the only enclosed mall to open in the U.S. in 2006 and was the fifth-largest mall in Arkansas in terms of square feet.

At the time of the tornado the mall’s key tenants included Target, Dillard’s, Foot Locker, Barnes and Noble, Bed Bath and Beyond and H&M. Brookfield Properties listed 66 tenants, the majority of which were clothing and apparel stores and restaurants.

“The mall is extremely important to our community and to the region and we look forward to them being open in the near future,” said Mark Young, president and CEO of the Jonesboro Regional Chamber of Commerce.

Brown acknowledged the drain that online shopping has been on brick-and-mortar businesses and that malls across the country were facing store closures and drops in traffic before the coronavirus broke out.

The pandemic, he said “has accelerated the time in which that became a problem. We are way overbuilt per capita on space and I just think malls are a huge portion of that space”

But, Brown said, Turtle Creek serves a trade area of a half million people and offers local shoppers big electronics outlets and other goods and services they can’t find closer. Businesses like Best Buy and Target have been mall anchors, he said, and if they reopen at Turtle Creek he would expect the mall to survive.

“I’d say generally we’re somewhat protected from it being a total disaster because Target is such a big driver,” Brown said. “All the restaurants do extraordinarily well surrounding the mall and you’ve still got people like Best Buy, Gearhead, Dillard’s, that all do really well because we do have a trade area that is so big.”

Full article can be found on Arkansas Business website here

"He said to them, 'Go into all the world and preac

HB Construction Update ::🚧 It is always fun to

In case you missed it….DOLLAR TREE at Hilltop is

Happy Mother's Day! To all the Mothers & Mother fi

Haag Brown Commercial is thrilled to announce @GuthriesChicken is coming to The Uptown! What's Guthrie’s? Only Am… https://t.co/i3pKkd8MIb
h J R
@haagbrown